With opening of TVI Express "Philippines" branch, some Filipinos are finding my articles revealing some facts about TVI Express they didn't know about and want some answers.  Suddenly one of my hubs got like 200+ views a day for several days (when it usually gets about 2-5 views a day). Then some potty mouth posted a comment about I need to be committed to a mental hospital, but didn't say why. Apparently, I had insulted his favorite scam.  As today is June 27, 11 days about would make it... June 16, 2011.

The IP address tracks to a UMobile, an operator in Kuala Lampur, Malaysia.

So what does Facebook actually say?   On June 16, this was posted...

Exact same words. While not conclusive proof, it appears that Antonio Pasaporte is not his real name.

This guy's awfully brave behind an alias. So who is this Joel Dela Torre Roasa? This is his facebook profile (which is public) 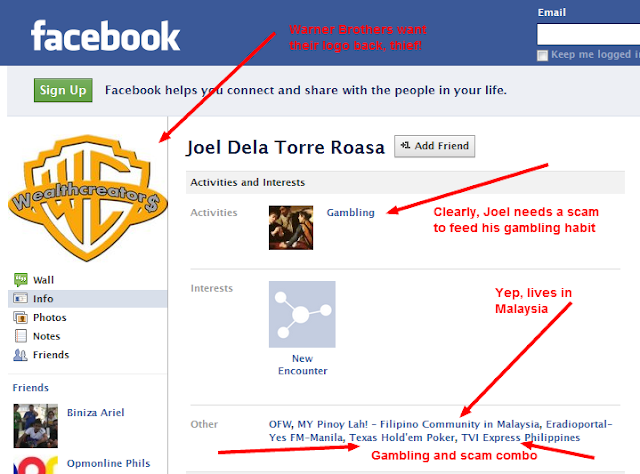 Not only does Joel here have a potty mouth, he appears to be addicted to gambling and scams, according to his own profile.

(I was joking about the addiction, but at least I joke based on reality, unlike Joel there who apparently pulled that insult out of his ***hole, which only proves he's full of **** .)

Apparently Mr Roasa read my blogpost, he had removed the offending logo AND his gambling reference. Who's feeling guilty now?

Why don't you remove the reference to Poker AND TVI Express while you're at it too?