TVI Express even made a spam music video!

It's just spam though, as it's just repetitive background jingle with "slideshow". 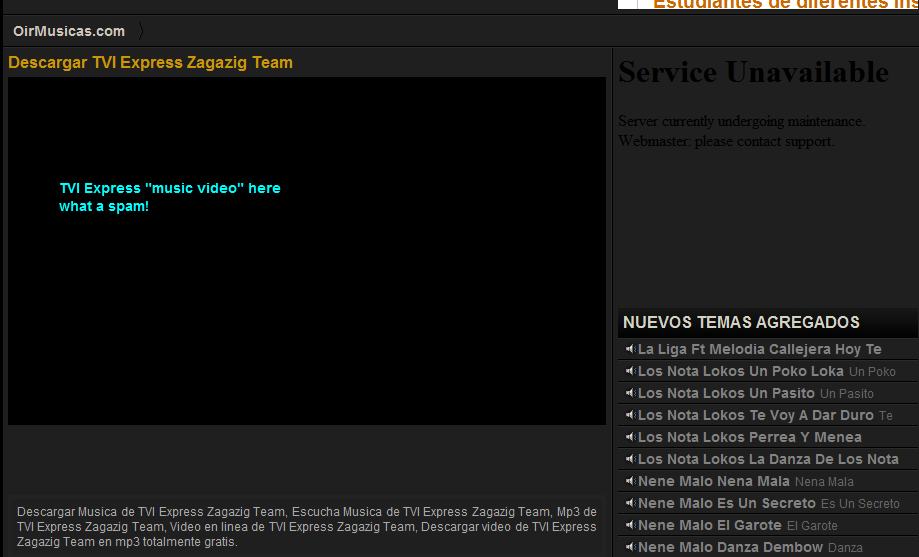 Another Indonesia TVI Express "leader" went into hiding when the pyramid scheme collapsed in Indonesia after the government yanked the business license last year. His victims will not stand by and see their money disappear, so they enlisted help of an NGO to help make their case. Selected highlights from the article autotranslated by Google


Pasbar, PADEK -Hundreds of members ( member ) PT TVI Express is incorporated in Jayasman Group Pasbar they feel cheated by the Group Jayasman. Miliran money has been paid member until now no clear end of the following base keutungan promised.
Despite peace efforts with the Jayadisman but to no avail. Finally, members of the PT TVI take legal action.Previously they were reported to Mapolres Pasbar but there is no bright spots. Then direct them to the District Attorney Simpangampek.-----
Separately, Head of the State Attorney Pidsus Simpangampek, Herman Syafrudianto when confirmedPadang Express Monday confirmed the report of the NGO Format Pasbar 42/LSM-FORMAT/V-2012 letters correspond to numbers. "Yes, we have received the report and we will process in accordance with applicable law," said Herman.

Meanwhile, Jayasman until now has not managed to find. Even when met at his house also was not in place.When contacted via his cell, was never raised.


Following link is in Indonesian:

In a previous complaint, someone said neo-vo.com is another scam launched by Tarun Trikha.

The website sells some jewelry and watches, but otherwise is devoid of info, other than something about residing in a building in Vancouver.

However, the "media" page contains some very bogus endorsements. 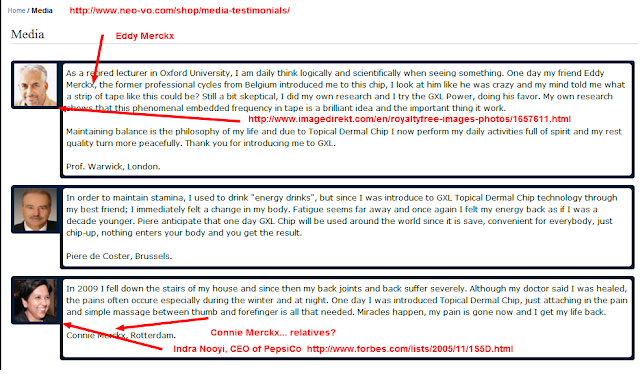 No idea who the 2nd picture is.

Third picture is that of Indra Nooyi, Indian-born CEO of PepsiCo.

The pattern suggests that whoever created this bogus testimonials page is Indian. Why else would they pick an Indian-born woman?

The address is also iffy.


Search of this address on Google shows at least two other companies at the same location. Indeed, Regus confirmed that it is a virtual office.

Neo Vo, and NEO Survey are indeed linked to Goernani Goenawan, the "Vice President" of TVI Express. So she definitely has a hand in this scam.

Following news about TVI Express fraud in Sumatra was auto-translated by Google. Here is a link to the original article in Indonesia. 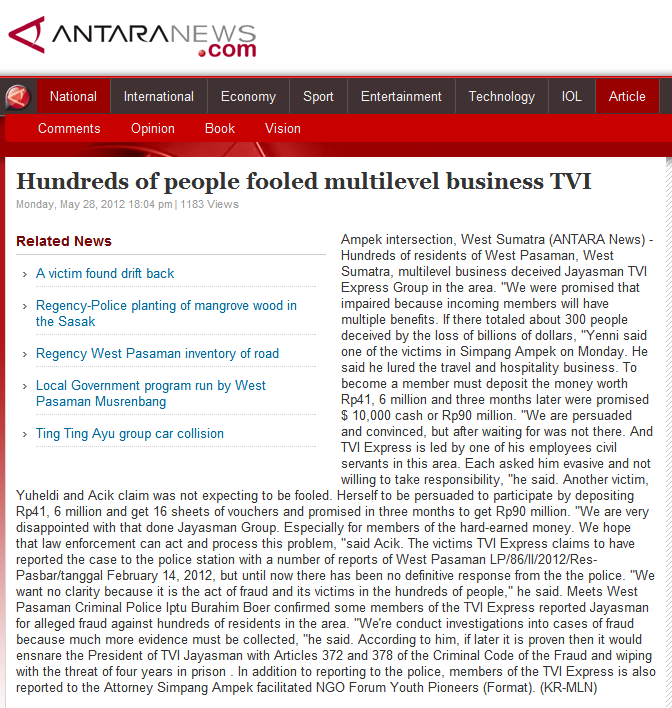 Confirmation: TVI Express dead in India as of February 2012

Previously we have noted that TVI Express had changed their Indian address to "Elite Travel" sometime in 2012. Now we have an approximate date: February 2012.

How? Because I found this guy's resume that says he was employed as "Customer Service Manager" at TVI Express in Gurgaon, India Office, up to February 2012. 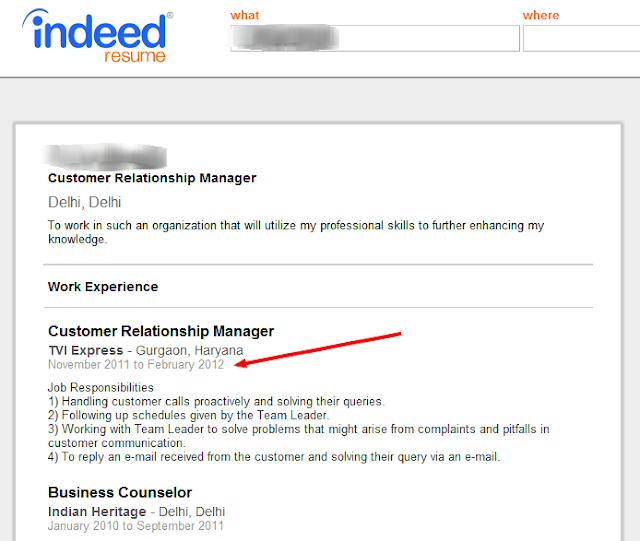 Actually I launched the new blog almost a month ago, but didn't mention it here.

"A MLM Skeptic" is an examination of MLM industry and Pseudo-MLM Scams, as well as their relatives like Ponzi scheme, through a skeptic's eyes. It goes into some of the most often used excuses by MLMers to "defend" their scheme, how to see through such fallacies (if they are indeed fallacies), and how to find the real information you need to make the proper decisions.

There will be periodically highlights of specific companies though mainly as study on how a company's claim may not match up to reality. However, majority of posts will concentrate on the various cognitive biases that trick the victims into believing something they shouldn't.

So, if you have a chance, visit my new blog "A MLM Skeptic"

Below are some recent posts in that blog:

Australian Federal Court had previously declared TVI Team Oz, the trio promoting TVI Express in Australia and New Zealand, guilty of promoting a pyramid scheme. It had just handed down the penalty: fine of $200000 Australian dollars (90K, 80K and 30K respectively) against the three members.

The court rejected one member's claim that she should not be fined because she is merely a victim.

The court also rejected another member's claim that she was not "warned" that pyramid schemes are illegal.

Apparently the third member was smart enough to shut up and make things even worse.

Well, maybe not TVI Express itself, but a couple Saudi TVI Express members with delusions of grandeur certainly think so: 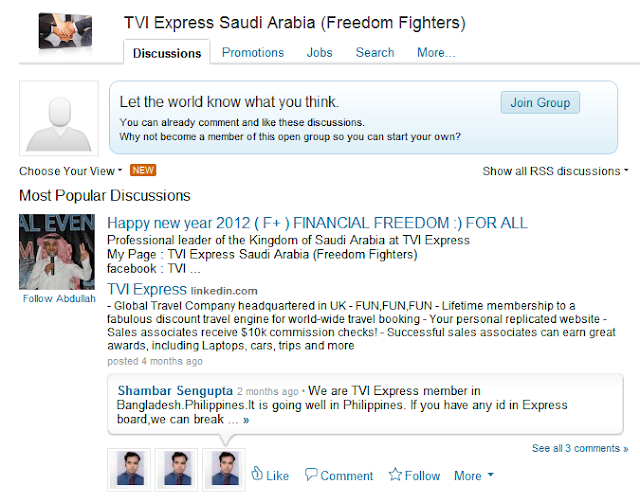 First of all, MLM is haram in Saudi Arabia. Indeed, all forms of MLM is haram. So these guys just admitted they are not true Muslims, basically, by participating in haram business.

(Yes, I am joking. These folks can't even write a "pun" about "financial freedom" properly.)

Previouly this blog has highlighted Ros Kaspi's TVI Express parrot site "increasemymonthlyincome.com" multiple times. The site apparently died in late 2011 only to be resurrected by another TVI Express member by the name of Verlyn Spreeman to promote his Zeekrewards affiliateship instead.

So what is Ros Kapi doing? Padding her fake resume on LinkedIn, apparently. 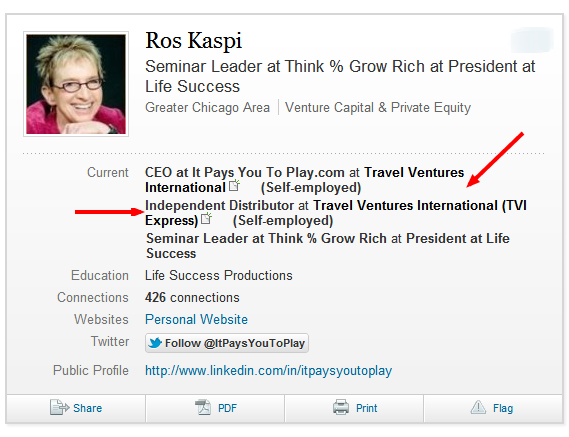 FYI, this profile's name is itpaystoplay

The "position / tagline" is already bogus

Location is right, but field/industry? Bogus. She's a "trainer" according to position/tagline. What does that have to do with equity and venture cap? Nothing.

Education is obtained at a company? She never went to school?

Personal website is...  Itpaysyoutoplay.com, which is dead, and the domain reg is...  set to private? Why?

But there are quite a bit more hilarity in her LinkedIn profile, if we look a little lower 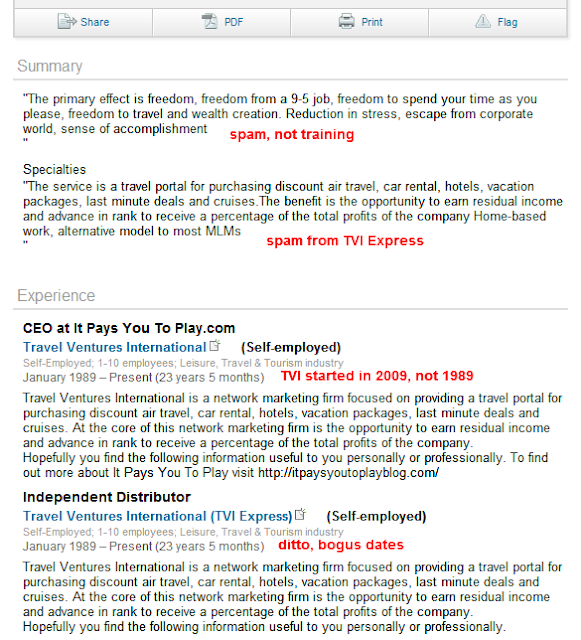 Apparently this profile is full of her spam and never updated ever since, as it contains total bull****.

Which sort of makes sense as she actually uses a DIFFERENT linkedIn profile: roskaspi, where she touts herself as a life trainer. The reality is she's another one who paid Bob Proctor's company for title of LifeSuccess coach. And guess who else is a LifeSuccess coach? Clarissa Calingasan, who went to several of TVI Express events and appeared on stage with none other than Tarun Trikha himself.

Gee, how the same names keep popping up, hmmm?

Oh, and Ms Kaspi? Fix your website. It's DEAD, yes, even your "good" profile's link.

Previously, we've highlighted several stupid announcements from a TVI Express "fan site" called increasemymonthyincome.com, ran by Kaspi and Jackson, two TVI Express reps who make the funnies announcements, parroting TVI Express announcements and upline statements without ANY fact-checking of their own, and even stole some office pictures off another website.

So guess what I found this morning? That the site is under new management. No more Kaspi and Jackson. Instead, we have some guy named Verlyn Spreeman... promoting ZeekRewards. 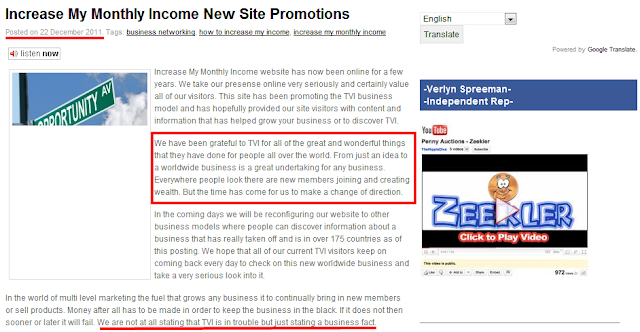 1) They switched over back in late 2011, okay... MORE THAN A WHOLE YEAR after TVI Express was issued cease and desist in Georgia, USA

2) They denied that TVI Express was in trouble.

3) They jumped into a suspected Ponzi scheme.

This is no surprise, since Verlyn "Buzz" Spreeman was a TVI Express member using account "thebuzz", wrote several "toolbars" for various browsers just to display TVI Express info, and apparently was a frequent contributor to this increasemymonthlyincome website. 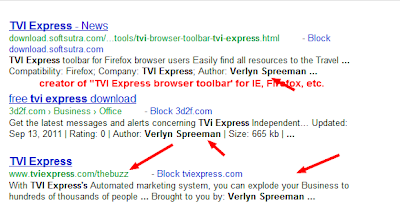 Indeed, he is now the registered owner of this domain.

Even his Facebook page says one of his favorite topics is "TVI-Info", which is of course, TVI Express.

Instead of admitting they bet on the wrong horse, they try to pretend "it's about to fail any way"... a whole year AFTER it was in deep doodoo.

AND their new scheme is a suspected Ponzi scheme, based on careful analysis.

Received the following report from a reader:


how we file a case againest tvixpress and tarun trikha , because we heard that tarun is now not in india , and the main thing is that tviexpress is now not registered with ROC with india goverment ,because the registered office of tviexpress holidays pvt limited is closed after raided by crime branch police. now tvi web site shows in his contact address for india is a Elite tours and travels which is registered in ROC govt of india in the name of someone mr. manmohan singh talwar and he says that he is taking a franchise from tviexpress for india opertions and tell that the head office of tviexpress is in indonesia, but after all this there is no doucment available that shows that elite tours and travels is franchise of tviexpress . so now the real situation is this that Elite tours and travels is also closed from 1st of april2012 and not giving any answer of our emails and their phone is always closed ,when we personally contact to the head of elite tour and travles he says that he left tvi and don’t contact to him about tvi . when we asked many question about tvi india to mr.tarun ,he not give any single answer about this and busy in his new airlines venture . so its time to taking action againest him ,lots of membars are lost their life and money and social status also because of tviexpress

I checked tviexpress.com and it was down with "502 bad gateway". As there was no other confirmation this is "unconfirmed".

EDIT: Updated, 8 hours later, tviexpress.com website is back, but the India office is indeed listed as "Elite travel". Interestingly, TVI Express used to have TWO offices in India. If both are gone, where are they running things from?

Not UK, as that's a virtual office (owned by Regus, with over 20 companies in same address)

Not Indonesia, as they lost their business license there back in 2011.

Not South Africa, as they had been investigated by authorities back in December 2010, with arrests made in 2011, and even in March there's reports that the forensic accounting team are still tracking the money.

If they don't start editing their **** they are just a spam network no better than those "article farms".

And here's one guy who thinks TVI Express is still a legitimate company.

From the article, he equates TVI Express to World Ventures, ignoring the fact that TVI Express is a scam busted around the world. (circled section)

Furthermore, in his 'criteria',(underlined section), he only cares about good comp plan and good travel package. Apparently, "legal business" is apparently not one of criterias when he picks what to join.

So why does it have tags of hotel, travel, and TVI Express? And all "related posts" are "make money fast" stuff? Spam blog are just so lame nowadays. 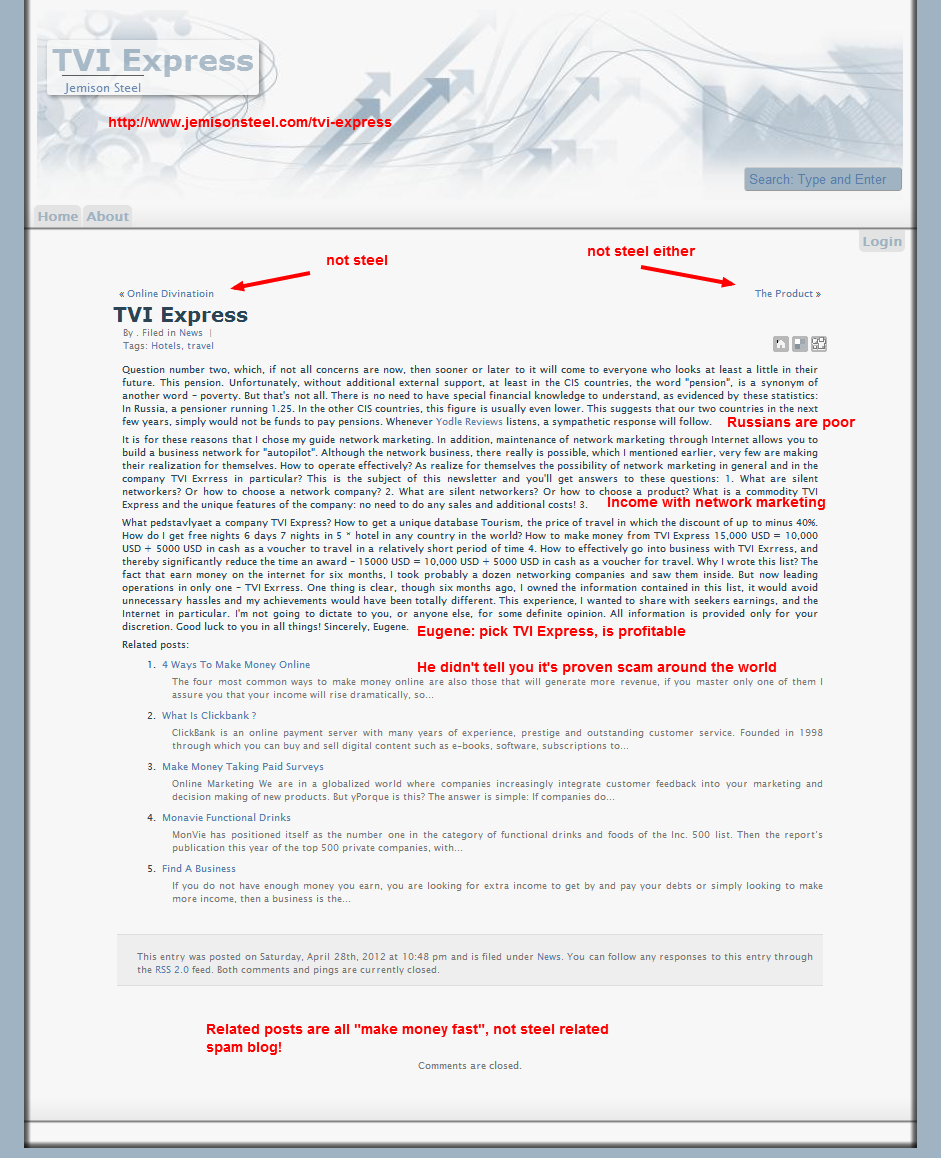