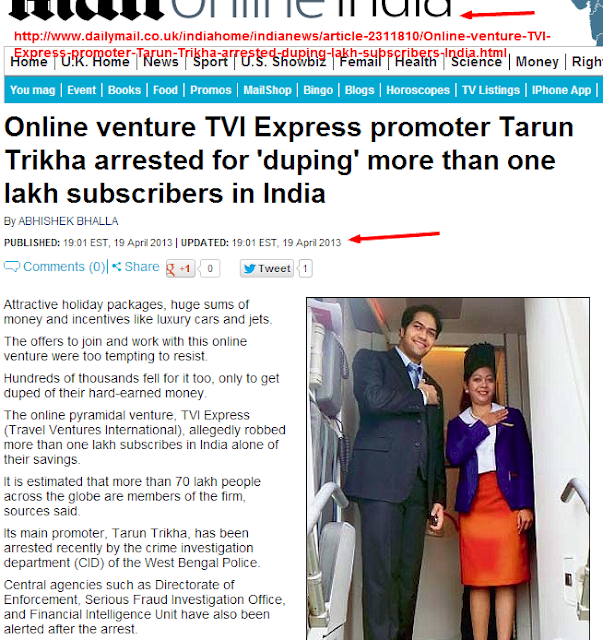 There are unconfirmed report on Facebook that Tarun Trikha was arrested by Indian police.

UPDATED: Someone posted this video:


As I don't speak Hindi, I can't vouch for the authenticity, but it appears to be genuine. UPDATE: Video no longer available, but a screencap was included below.

And this photo, from a group called Justice Tarun, apparently a group of victims of TVI Express in India.  Apparently CID took Tarun Trikha into custody at Delhi airport, and was transferring him to Kolkotta when the news leaked and the victims held an impromptu demonstration while CID guarded the prisoner (who chose to hide his face with a towel)  who did a bit of detective work, tailed Tarun Trikha to the railway station, and called in CID (Criminal Investigative Division) of Indian Police is to be commended, however, we shall see how the prosecution goes. OLD NEWS: Pacific Royale had no CEO back in August 2012?

The paper however, stated that the airline is owned by Gunardi Gunawan and Tarun Trikha.

Frankly, I have yet to see the shareholder list of the airline. A couple Indonesian newspapers and airline blog sites have repeated the info, but then, I haven't seen any official confirmation of the ownership / shareholder.

According to a more recent article in AsiaOne (a newspaper in Singapore), Pacific Royale ceased operation back in 2012.