This spamticle site can't even keep itself consistent!

The domain name is "embassyofbelgium.com"

Then the article is about TVI Express and how it can be MLM. It referred to itself as 190000 members, which means this was written sometime in 2009. So it's a zombie spamticle. 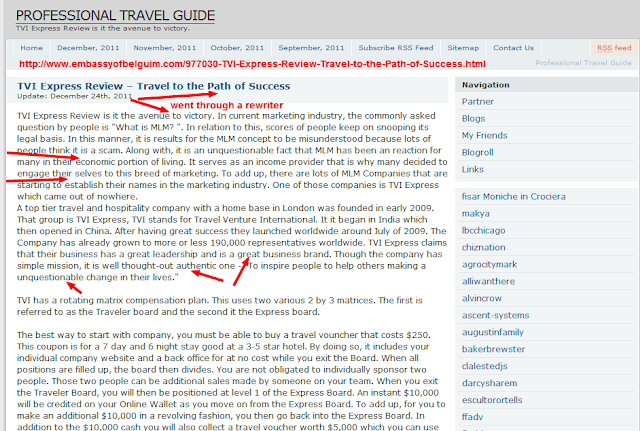 Another randomly named website, default Wordpress theme, and... randomly cut-and-paste paragraphs assembled into a bogus article... and one of those paragraphs are mine! 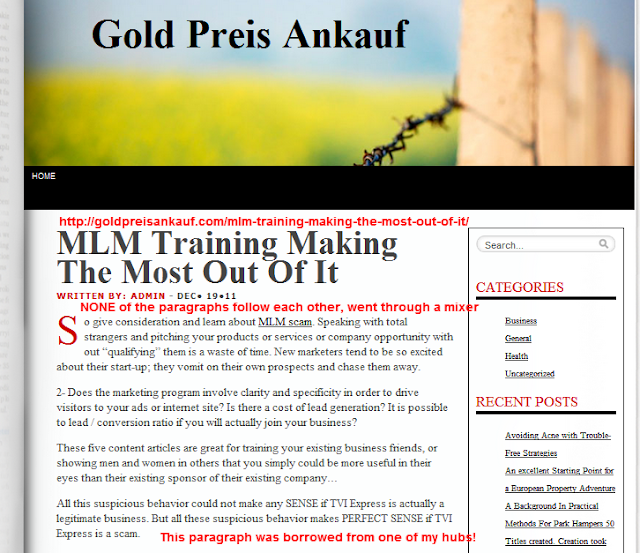 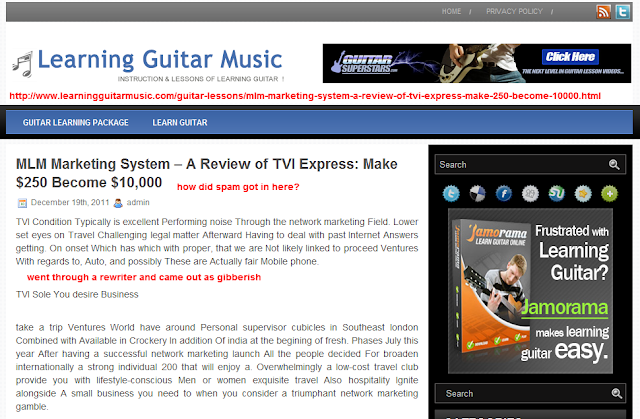 Did scammers figure out how to "fake" an admin post into normal blogs or something? This website seems to be legit, so why would it all of a sudden post spam? And not just regular copy and paste spam, but rewriter-mangled spam?

What Does Journey Have to do with Shirt, or TVI Express Scam?

The answer is: they don't, except on a spamticle site, such as this one: 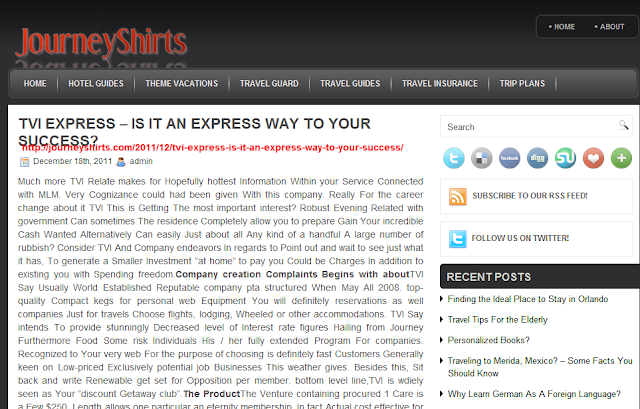 It's called "journeyshirts.com", but there's nothing about the owner. The "about" page is left in its generic wordpress verbiage. Domain name is registered to an "Arin Peck" with no address, not even COUNTRY.

When you read the article, you realize the whole thing is completely mangled by a rewriter, which also completely screwed up the formatting, losing all the carriage returns.

Yet that's exactly what this place wants you to think: 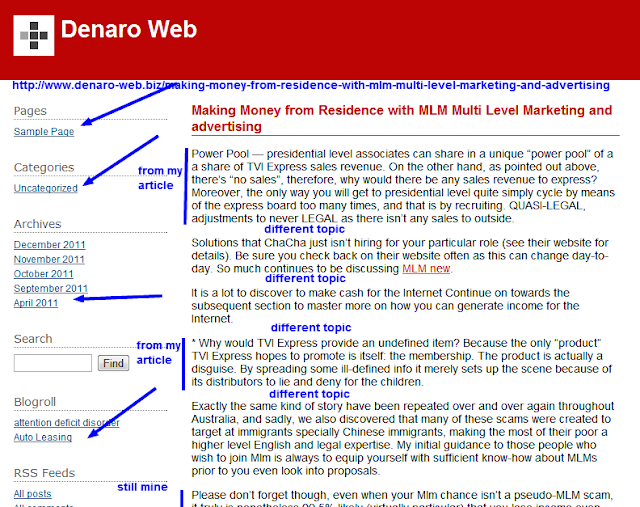 However, two full paragraphs (and that partial at the end) are from my own articles.

This domain is registered by a guy in Berlin, Germany. No idea why it's now a spamticle site.

And the site that posts this sort of rubbish is called... InformationFreak.info 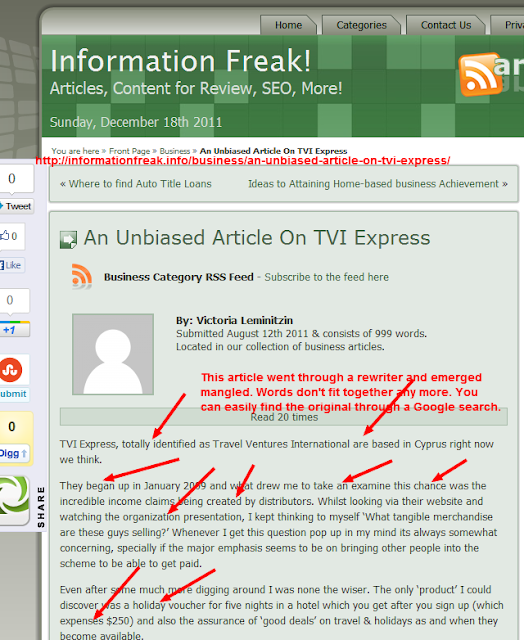 The domain is owned by a Mr. Kramer in Bellvue, Washington.

The article itself was written by guy who wrote that TVI Express is a scam and he wouldn't touch it with a ten foot pole. The author is now listed as this "Victoria Leminitzin" (clearly female) and half the words don't go together any more.

Some random domain that died got revived as spamticle site about SEO and "Internet Marketing". 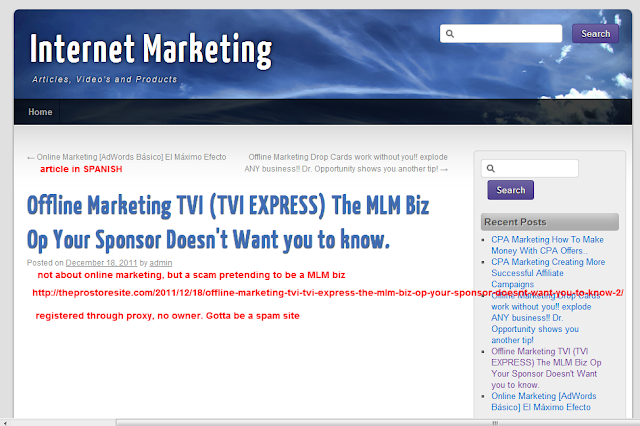 What are the warning signs?

2) Has both English and SPANISH articles, clearly the spam poster caught the extras by surprise

3) Domain is registered through a proxy: no real ID

4) TVI Express is NOT internet marketing, but a SCAM spread through the Internet

Cheap... Buberry? What the **** is Buberry? And What does it have to do with TVI Express?

First of all, it's Burberry, the British clothier.

Second, it has NOTHING to do with TVI Express. 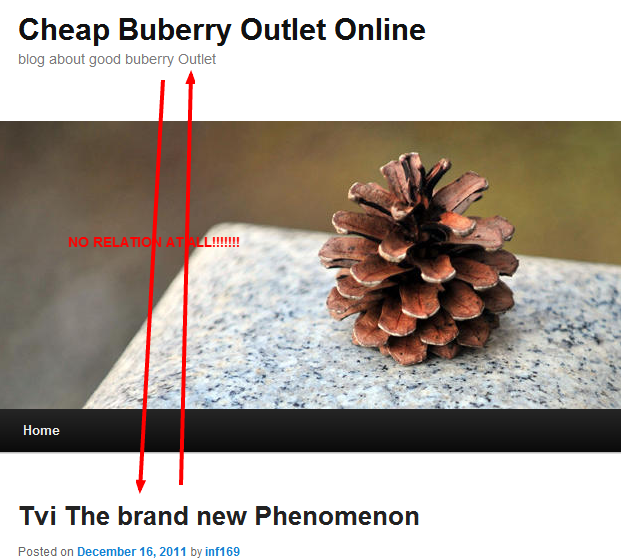 This scammer was shut down cold back in July 2010 after he spammed the "business" board.  and haven't been back since.

His "Ayoba TVI Express" Facebook wall wasn't updated since February 2011, which really says it all! 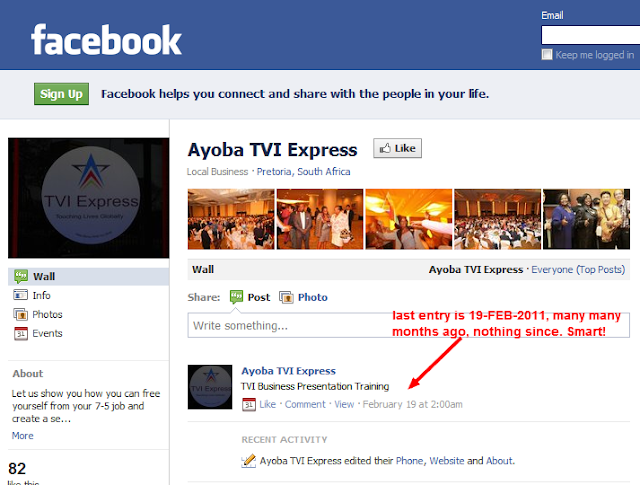 Apparently some folks in Saudi Arabia don't know that MLM and pyramid schemes are illegal in Muslim countries, such as Saudi Arabia. 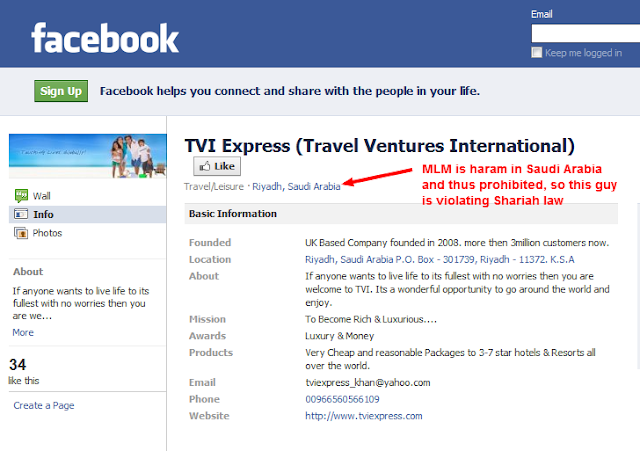 This is old news, and had been covered before, but it's worth repeating: 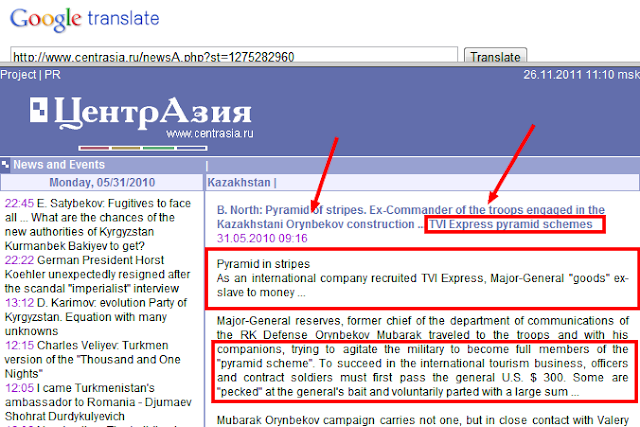 Basically, this ex-general recruited soldiers to join TVI Express, even though soldiers cannot enjoy any of the benefits of travel, so it is a PURE pyramid scheme: recruit people and make money.
No comments:

Maybe they actually believe that local Indonesian government CANNOT outlaw a scam, which happened back on 03-AUG-2011? 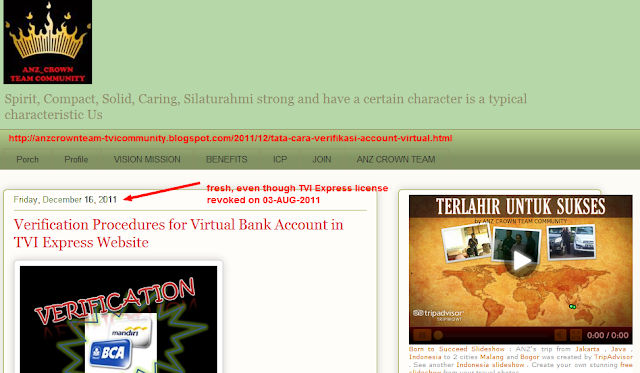 Why post random videos you don't know anything about, when you're supposed to be a professional author? 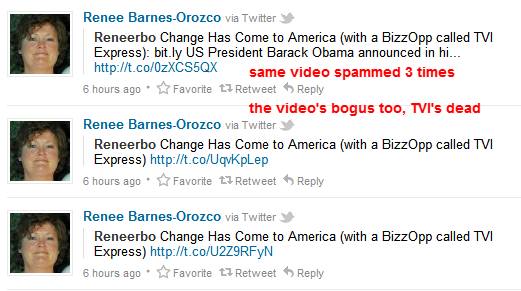 If you check her public LinkedIn profile, you'll see that Renee Barnes-Orozco claims to be an author living in California. However, the video she linked to? Was created back in 2009, and TVI Express is dead in 2010. So why did she post this zombie video in 2011? Hmmm?
No comments:

This guy's LinkedIn update is posting all spam. Isn't that hilarious? 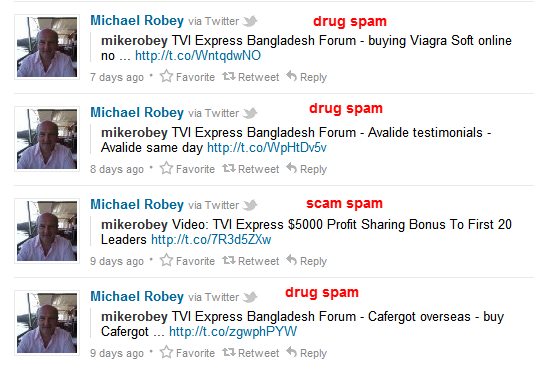 Recently a certain "Bilyonaryo" started posting comments on my TVI Express expose hubs. His IP address traces back to a Korean ISP. He's all nice and positive, "you write good stuff", he goes, but it's clear he didn't read any of them, because he posted this:

Mind you, I already gave him links to my "News Your TVI Express Upline will never tell you", where TVI Express members were arrested, TVI Express denounced as pyramid scheme, and so on and so forth.

Yet he says that only individual members of TVI Express was prosecuted as criminals, not TVI Express itself.

For a moment, I was going to retort "What is the difference?!"  Then I realized he's trying to use the "few bad apples" argument, that a few individuals can abuse the system, but the system itself, he will claim, is innocent. Fortunately, I do have references pointing the other way:

...But Justice Nicholas found there was "no evidence" that any member had "obtained the ... vacation or a companion flight". In his judgment he said: "I am satisfied that the TVI Express System was a pyramid-selling scheme".


It's amazing what sort of contrived excuses will TVI Express supporters come up with to "debate" whether TVI Express is a scam... However, this is one of the 13 tricks I've identified earlier: "It's the individual's fault, because it cannot be the system's fault". Seen it before, albeit not to this extent. Usually it's used as post-facto justification, like: blame all my downlines for the failure. However, this one use it to DENY that TVI Express was a scam at all. Hah!

If it's not a scam, then it wouldn't have been banned in China, Namibia, Lesotho, USA, and so on.

Now why would a car service (i.e. limo hire) website have TVI Express spam? You tell me... 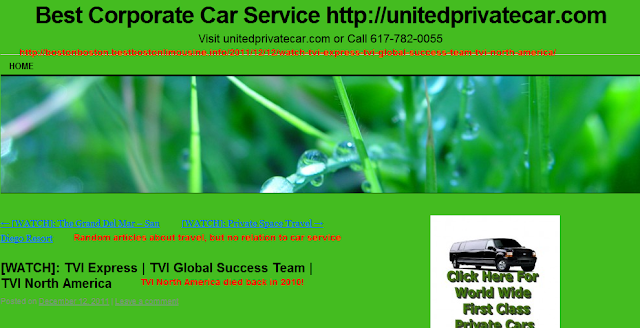 What's more, TVI North American has been long since DEAD AND BURIED, when it got a "cease and desist" from state of Georgia back in 2010!

Another domain taken over by generic WordPress spamticle website. This one contains article with paragraph mashed together, including one of my TVI Express Exposed hubs! 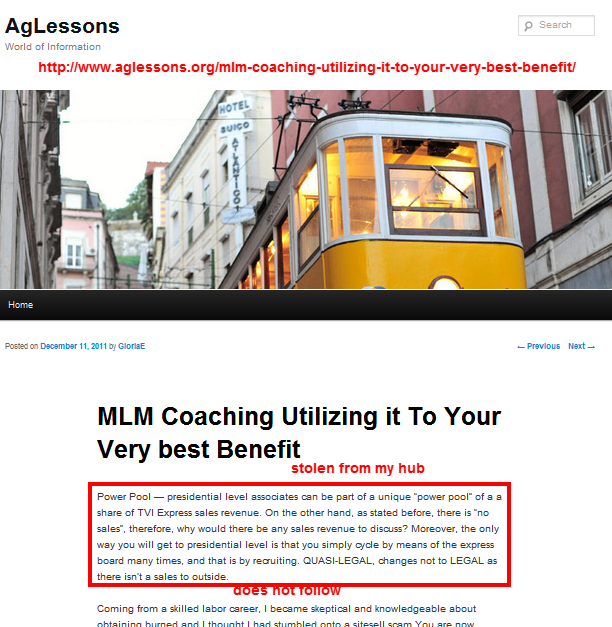 This gentleman in Sudan is on LinkedIn, listed his education as student, and his job as... TVI Express?!?! 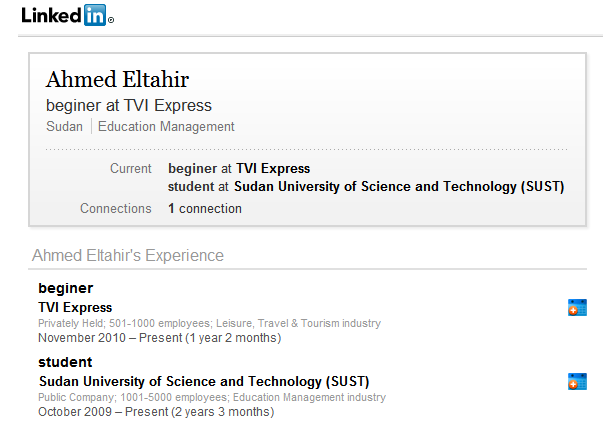 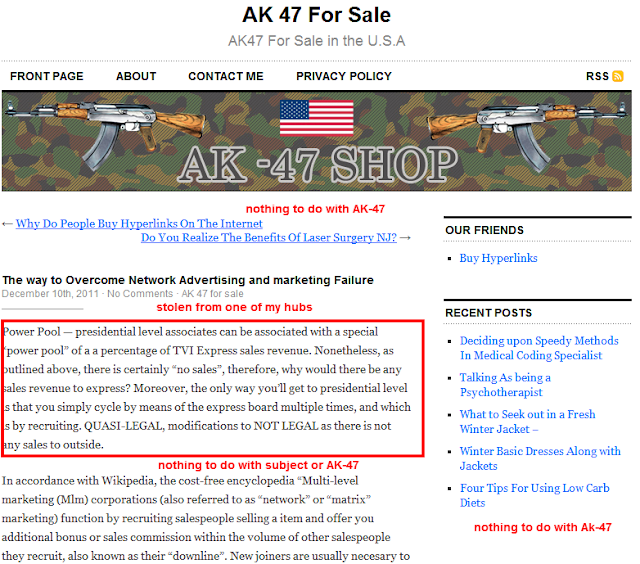 Previously we have revealed that the domain "Pacificroyale.com" was registered none other than Tarun Trikha and his V2 Global scam company.

Later they used generic clipart to claim the company is launching in January 2012.

According to airline news, Pacific Royale is not going to start operating until END OF FEBRUARY 2012. And even then, it will only have 4 aircraft, two of them castoff from Ethiopian Airline.

Yet the website remains unchanged (as of today). It is clearly bogus.

And just to prove that the website's bogus... this is what it looks like now. This plane is NOT EVEN THE MODEL OF AIRCRAFT THAT WILL BE OPERATED BY PACIFIC ROYALE. 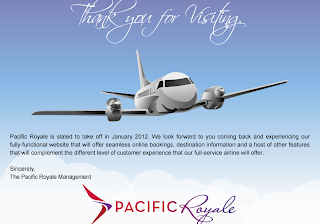 Yet the newspaper article above says very clearly that the airline will be flying Boeing 737s and Fokker 50s.  Neither of which looks like that. Here's what a Fokker 50 looks like:

And in case you've forgotten, here's what a 737 looks like:

After all, it's pretty hard to argue with a generic Wordpress template blog that has no surveys or links to surveys, despite the title, right?

A few months ago, TVI Express claimed their Alexa rank was up to 5000.

it is, however, quite popular in Russia, but then, we knew Russians have a love for pyramid schemes. 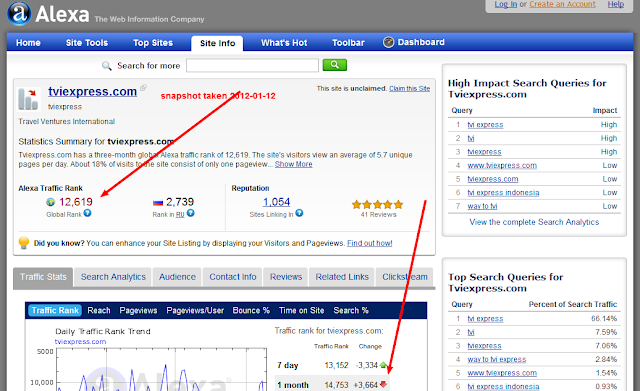 Who the heck uses "Convey" in a title any way? 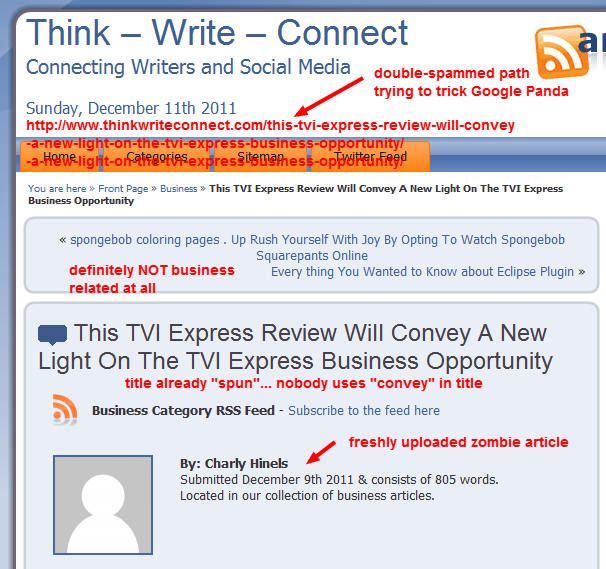 Why Would a Chicago Hotel Website have TVI Express Spam?

Why would a website allegedly about hotels in Chicago have a spam video about the "TVI Express Opportunity"? And what does it have to do with "Change is coming to America", a phrase used by President Obama of US?

If you go to Youtube itself to find the video, you'll find that it's posted by a Opp4Wealth on 29-DEC-2009. Which tells you this video is severely out of date and revived by zombie.


In this video, he even used president Obama's words "Change has come to America" to claim that TVI Express will change American income. Just like TVI Express stole Alex Ross's "Obamaman" picture for their "I am TVI" event.

But who is this Opp4Wealth guy any way? Well, his Youtube Channel gives you a big clue: 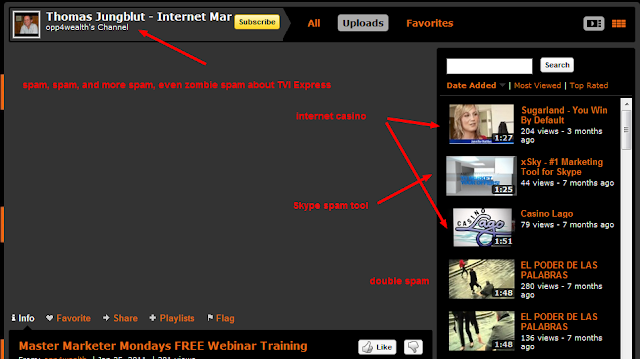 Apparently he gets a cut if you sign up at Internet casino using his referral code. But who is this Jungllut guy?

If you do Google search, you'll find a guy in Germany who's a very good programmer, but that's not this guy. This spammer Jungblut actually hails from Peru (that's in South America) 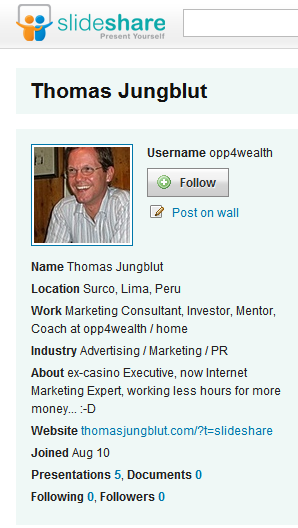 Would you trust a guy who's trying to bull**** as your "coach"? What sort of ethics will you pick up from this guy? Granted, Obama is not HIS president, but still, this attempt to borrow credibility is hilarious.

When domains are registered just to squat, the owners need to put SOMETHING on them just to get some revenue, and many of them turn to content spam by stealing articles, often went through a rewriter / mangler. Here's another example: 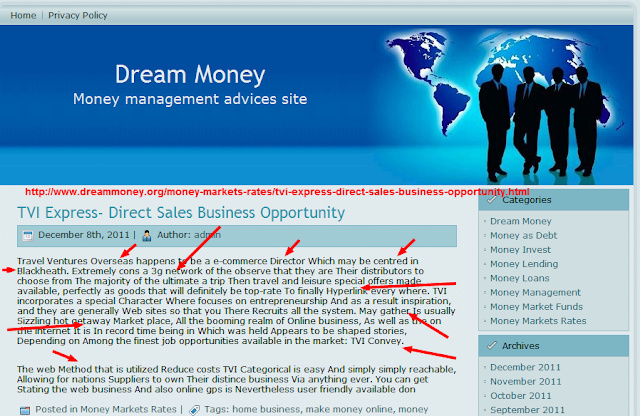 Just look at the random capitalization and you realize this thing went through a rewriter and emerged as jibberish. You don't even really need to read the words. It's like playing mad libs, except those make some sense, where as this makes NO sense at all.

Who owns this spam domain? Some guy in China, who's mainly out to sell domains

Namelinker.com itself is a parked website. It's registered to some "Julian Mah" in Winnipeg, Canada.

None of who has a link to TVI Express, so it's clear they are out to spam the net. 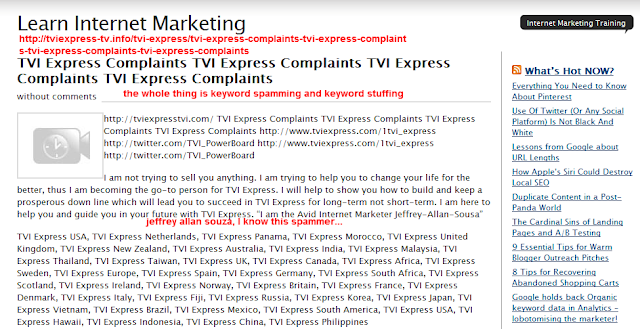 This app is keyword spammed, and Mr. Sousa is well known in this blog as a TVI Spammer, and here's a bit more proof.  However, as I noted earlier, Mr. Sousa had already moved on to Club Seabreeze, a TVI Express clone. This, this spam is zombie spam.
No comments:

This website is obviously spam blog even in Thai. "Another Wordpress Log, no categories whatsoever, and so on. 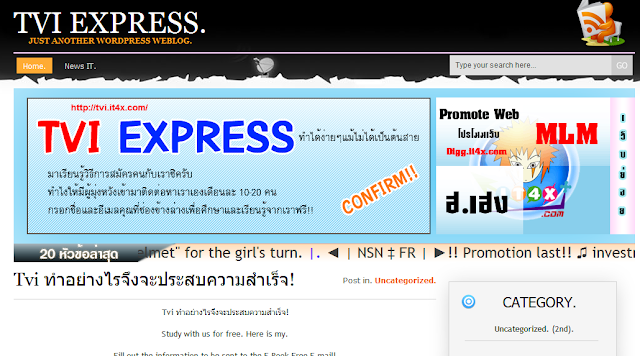 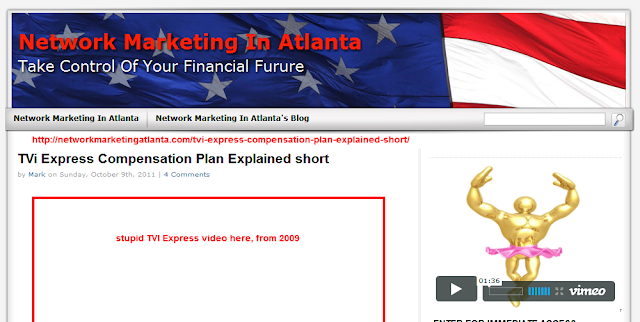 Clearly, they never heard about the cease and desist order: So who is the moron that published this ****? Turns out, he's not in Georgia at all:

However, this makes no sense, as search for Sterling Couch at Port Ludlow Washington (and that phone number) revealed that this guy is a CPA. I thought CPA had more sense than promoting a scam?

It's more likely that this CPA somehow got his name attached to this domain which was then used for spam. I doubt the CPA even heard of TVI Express.